Walking through Florence, taste by taste

A short itinerary covering the flood of culinary traditions of the Florentine school is indeed difficult to draw up, so we will limit ourselves to suggesting places so that you can choose as close as possible to your tastes and the time you want to dedicate to this particular food and wine experience.

A renowned true Florentine tradition, they originated from a popular gastronomic custom in the 15th century. Originally they were simple wooden carts that acted as kiosks and were pushed by hand, in which you could find the famous sandwich stuffed with Lampredotto. Typical of Florence, Lampredotto is made up of a lean part, called ‘Gala’, and a fatty part, called ‘Spannocchia’. Even now it is prepared and cooked in the laboratory and only then is it reheated and cut on the cutting board. It is eaten inside a sandwich called “Sèmelle”, an unequivocal symbol of Tuscan character. A pinch of salt, black pepper and/or various sauces complete the work. 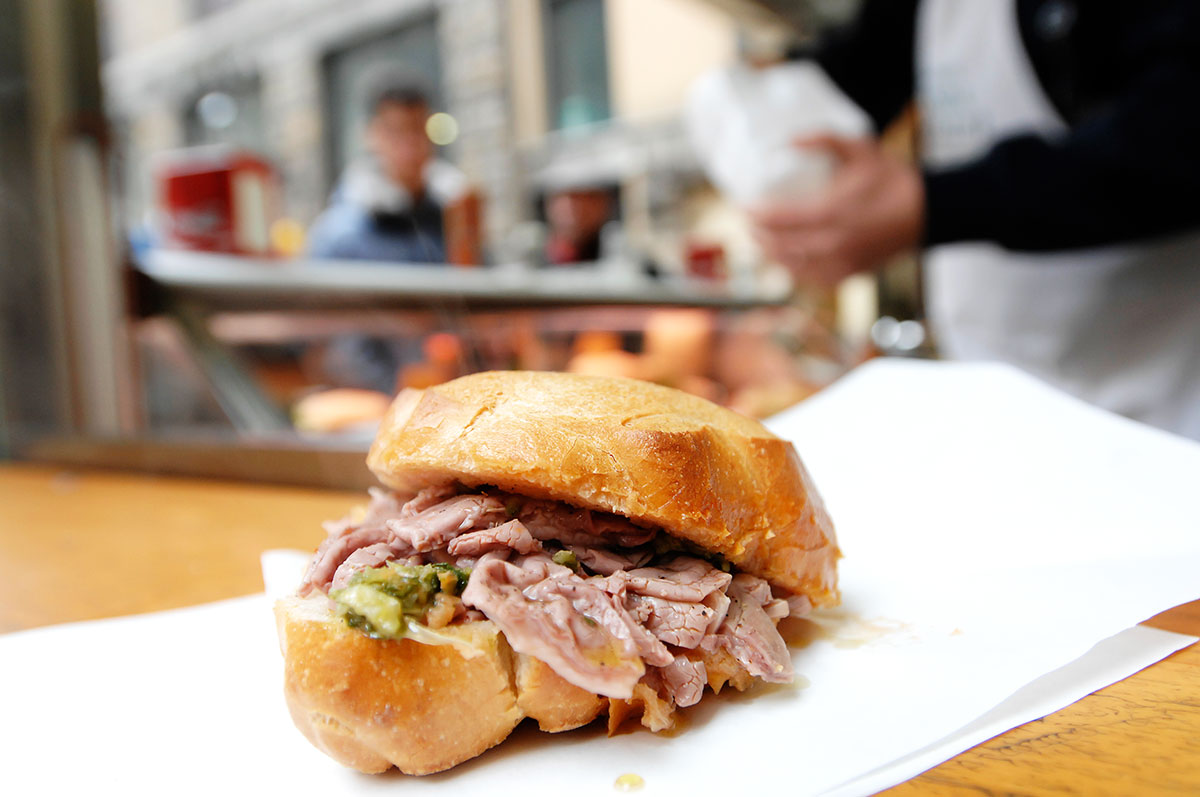 In the last century, Florentine history has also passed through these characteristic establishments, as happened in previous centuries in many other European squares.

The first examples of such cafés in Florence were in fact the Hapsburgs, who brought the first example of a literary café to the heart of the Boboli Gardens, where Peter Leopold – in 1776 – erected the pavilion called Kaffeehaus, to discuss serious and facetious issues with his court over a good coffee.

Over time, various similar establishments were opened, but the oldest one still active today is Le Giubbe Rosse, in Piazza della Repubblica. A meeting place for the artists who made their mark on Futurism, Le Giubbe Rosse saw artists such as Marinetti and his associates sit down to imagine and lay the foundations of what was Italy’s first artistic avant-garde of the 20th century.

On the other side of Piazza della Repubblica we can find Caffè Gilli, another historic landmark of Florentine life in the last century. When, in 1733, the Swiss Gilli family opened the Bottega dei Pani Dolci, it was hardly expected that their establishment, despite having changed area and type of business, would make it through the next millennium.

Another stop among the historic literary cafés is surely Caffè Paszkowski, a salon that has always aimed at modernity and is famous for having hosted the first orchestra composed entirely of women in the entire history of Florence. A delightful place that regularly offers its renowned café-concert formula.

Another place that would be impossible not to mention, despite being slightly more recent than the previous ones, is definitely the Giacosa. Situated in Via de’ Tornabuoni and founded in 1927, it is most famous for being the birthplace of the famous Negroni cocktail. Unfortunately, its recent history is extremely troubled: closed in 2001 due to financial difficulties, it was taken over by the Cavalli group, which unfortunately only managed to sustain it until 2017, when it closed, justifying itself with an unsustainable drop in turnover.

Finally, a must on the Florentine food and wine tour is the Rivoire in Piazza della Signoria, opposite Palazzo Vecchio. Founded in 1872 as the “Fabbrica di Cioccolata a Vapore” (Steam Chocolate Factory), it soon became a place of worship both for tourists, who chose it for its spectacular view, and for Florentines, who appreciate a journey into the past characterised by mirrors and retro furnishings. 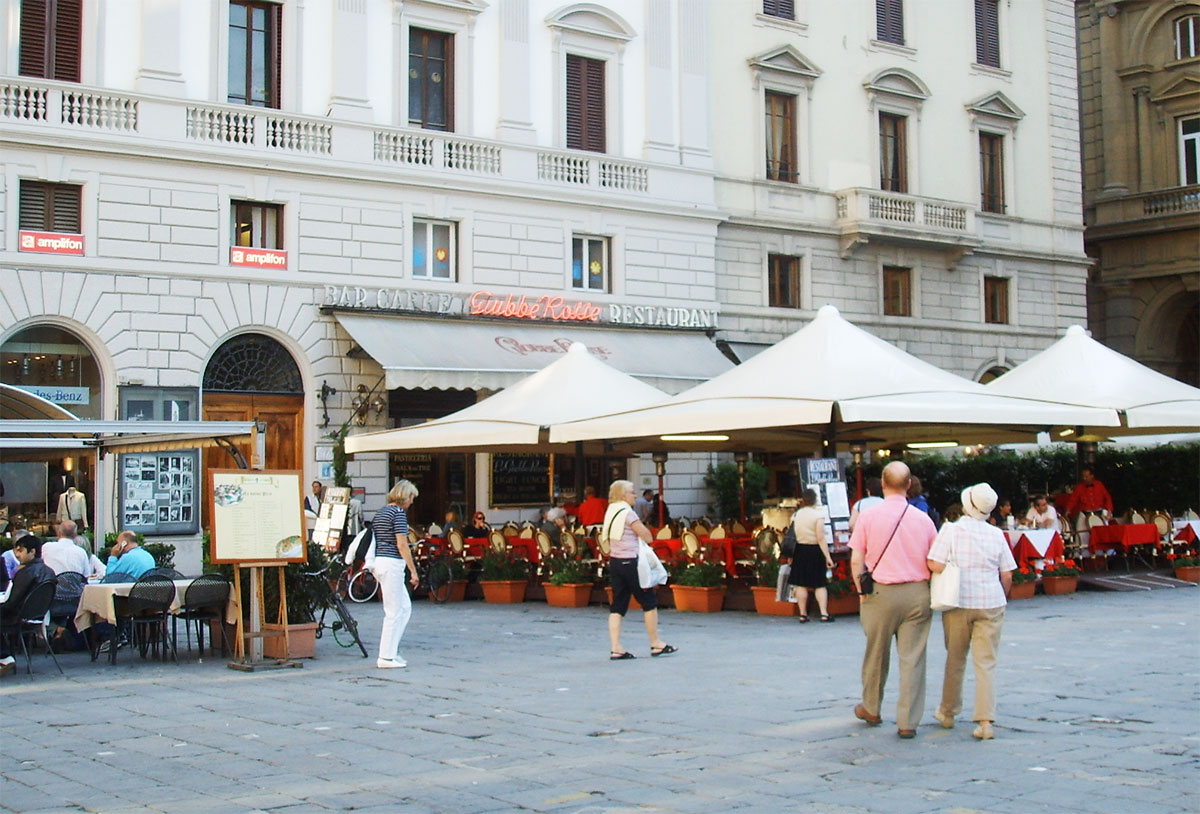 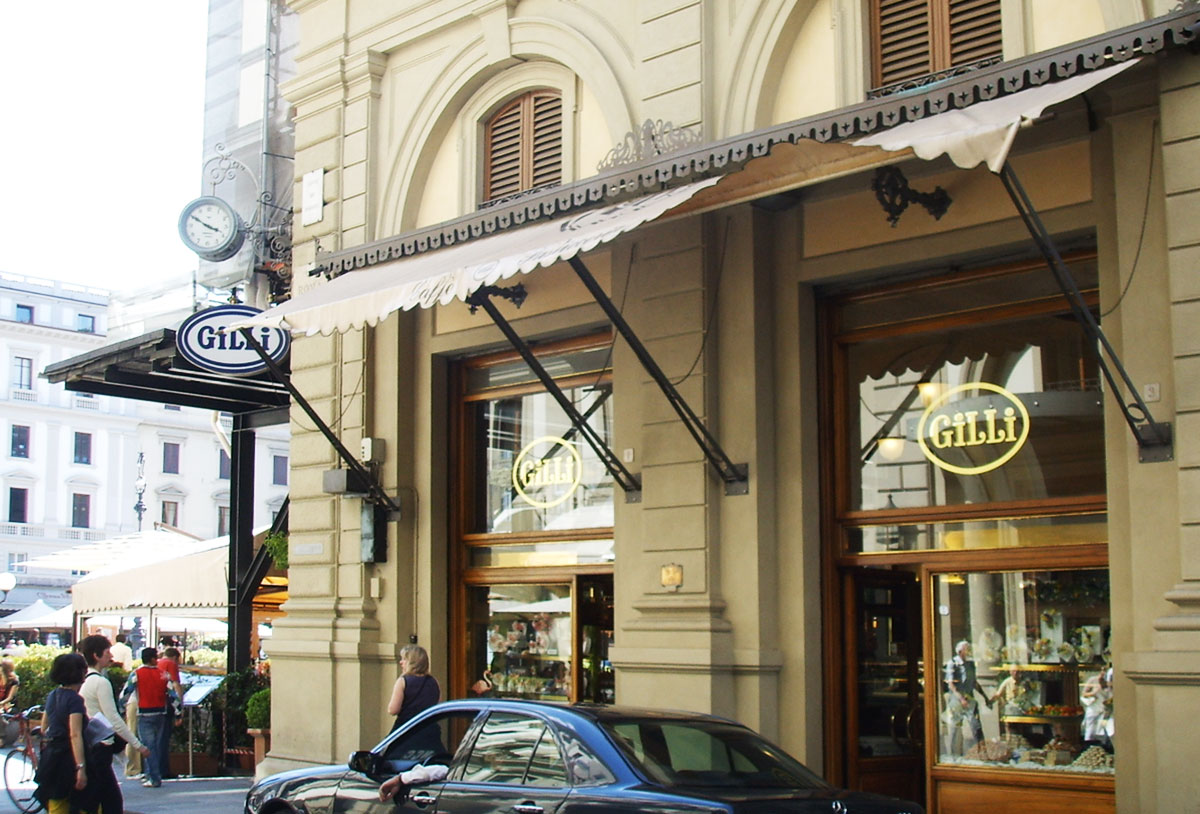 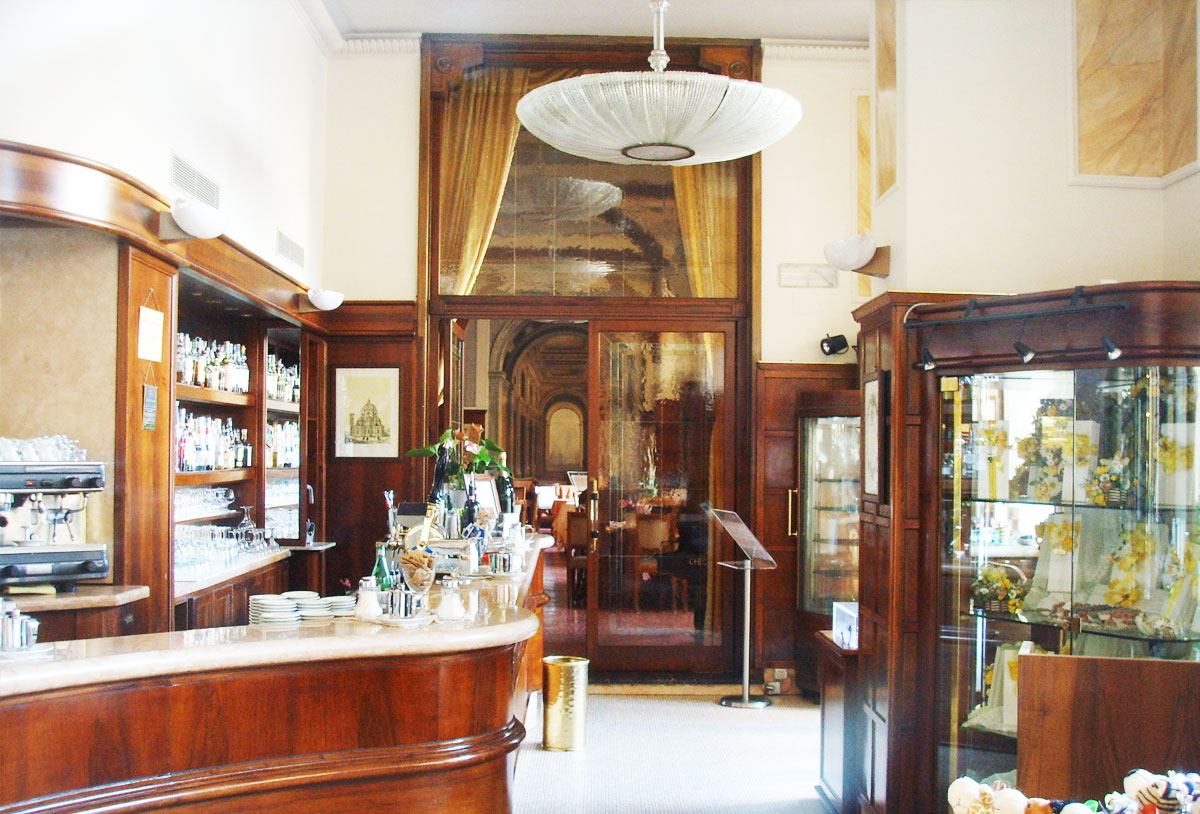 Charcoal grills and steaks have always been part of the Florentine culinary tradition, so much so that the cuisine of Florence is known to most people, in Italy and abroad, for the famous cut of beef called ‘Fiorentina’. More precisely, Fiorentina is obtained from the cut of the loin of veal or rump. In the middle it has the characteristic “T” shaped bone that separates the fillet from the sirloin and the height of the cut is not less than a finger or a finger and a half. It must be cooked, strictly on embers or grills, until it is rare.
A historical dish, dating back to the Medici era, it was eaten on the feast day of San Lorenzo, 10 August. Hardly hit at the beginning of the 21st century by the worldwide spread of BSE (known as the mad cow disease), which forced the European Union to ban this type of cut, but five years after the emergency began and the alarm has been lifted, it is back on the tables of Europeans and in Florentine steakhouses.
There are so many bracerie and bisteccherie in the city, some of them of historical importance, that it is difficult to give advice. 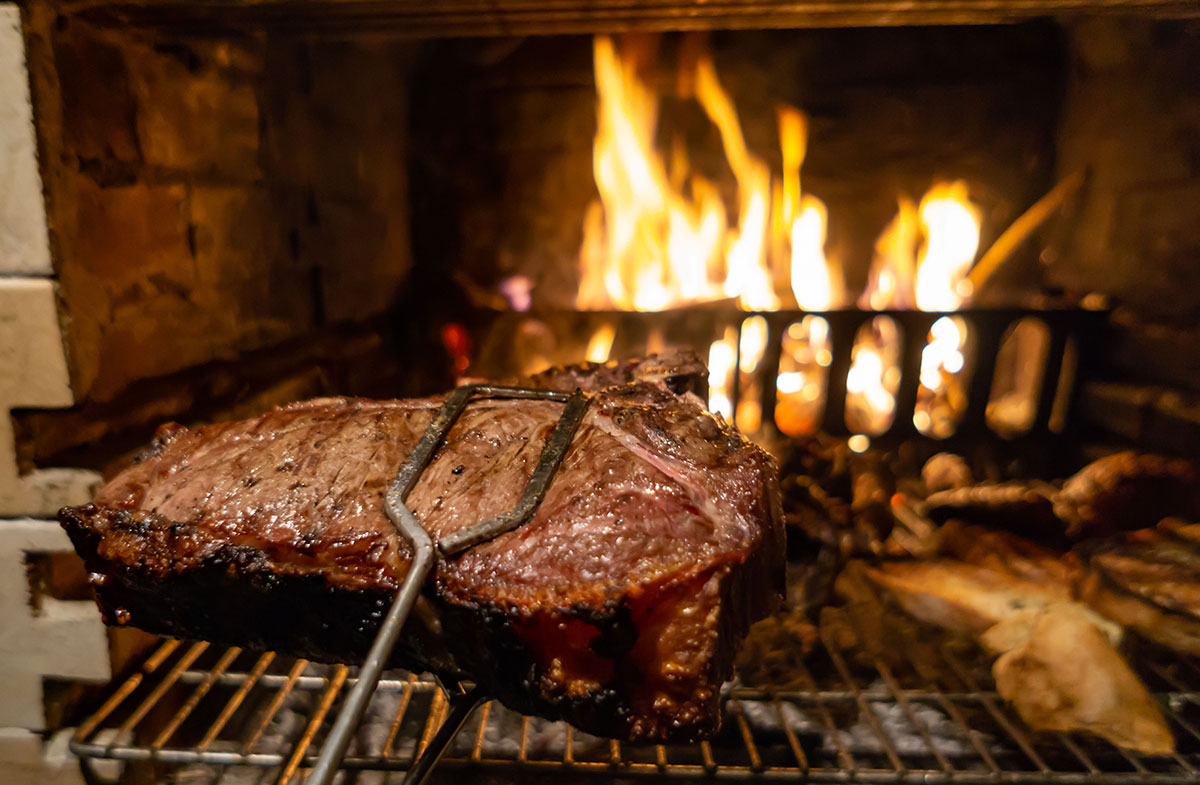 In Florence, trattorias, or fiaschetterie, represent an element of identity. Moreover, in the city they traditionally eat and drink well, and the culture of wine from the nearby Chianti Hills goes perfectly with typical dishes such as Ribollita, Bistecca alla Fiorentina, Lampredotto, Peposo dell’Impruneta, but also general cold cuts and cheeses. This union has been going on for centuries, ever since the trattorias in the historic centre were and often still are located in the traditional ‘buche’, or cellars of a noble palace.
For example, the origins of the “Trattoria Gozzi” in Piazza S. Lorenzo are very old. It was founded at the end of the 18th century as a wine shop in Palazzo Bandinelli, and then transformed into a trattoria between the end of the 19th and the beginning of the 20th century. It offers classic Florentine cuisine in a charming setting with vaulted ceilings and capitals, wrought iron chandeliers and marble tables.
Historically also known as “Trattoria Coco Lezzone”. Since the early 18th century it was a tavern that occupied part of a medieval tower near Via Tornabuoni. The trattoria has changed many managements and names until the current one, and since 1971 it has been run by the Paoli family. Traditionally, it has been frequented by a number of well-known personalities. 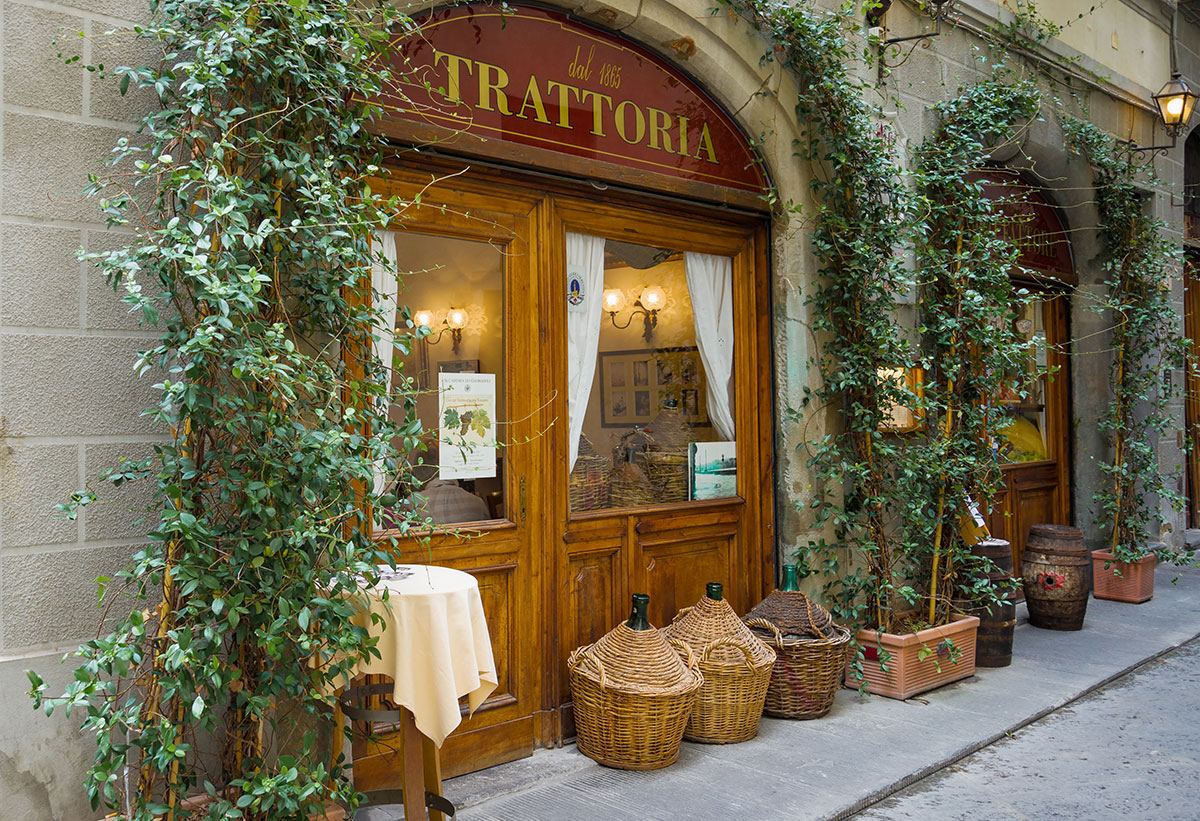